I’M heading into another vacation, and I’m nervous. I don’t want to kill again.

I pretty much did in my last break, this past March. Not an act of premeditation so much as passion. I got so jacked up. Seven days in Hawaii. It was going to be the best vacation I’d ever had.

And then it started.

Somehow my wife and I had failed to anticipate the effects of a time-zone change on our two toddlers. Then there was the rain. I took refuge in my phone, checking the weather, reading the news. I wondered why I wasn’t relaxed. The pool was too cold. How much were we paying for this? I checked my phone to see if anyone missed me on Facebook. Nope.

I had hoped to return home at peace. Instead I was exhausted, defeated and irritable.

What had I done?

With another break looming, I went seeking professional help. Is there a way to get the most out of a vacation? Or at least not to ruin it? Can one avoid the seven-day trap: three days impatient to be relaxed already, two days actually being relaxed, and then two final days of dread before going back to work?

And can any of this be supported by actual science?

As it turns out, yes. The secret to not killing your vacation revolves around understanding not just your motives, but also your brain and the role it plays in undoing your precious time off.

And so, after a series of conversations with those who seem to understand my brain better than I do — neuroscientists, behavior experts and even business executives — I have a few answers. Herewith, the last Vacation Mental Prep List You’ll Ever Need (made with actual bits of brain science).

Picture a sedan tearing down the autobahn, its engine redlining. The driver slams the brakes. The car skids, spins, slams into guardrails and finally stops. This is your brain starting a vacation. People are working at historic intensity, ever-connected and consumed by work. So it’s not surprising that even though your body might be comfortably prone on a beach towel, your brain is still scrolling through to-do lists back home. In fact it is unrealistic, experts say, to expect your thoughts to stop on a dime.

Which is why, said Emma Seppala, the associate director of the Center for Compassion and Altruism Research and Education at Stanford University, letting go is something “you have to practice on a daily basis.”

This, she and others say, entails being deliberate, at some point in each day, about shifting out of work mode and keeping the eternal to-do list at bay. 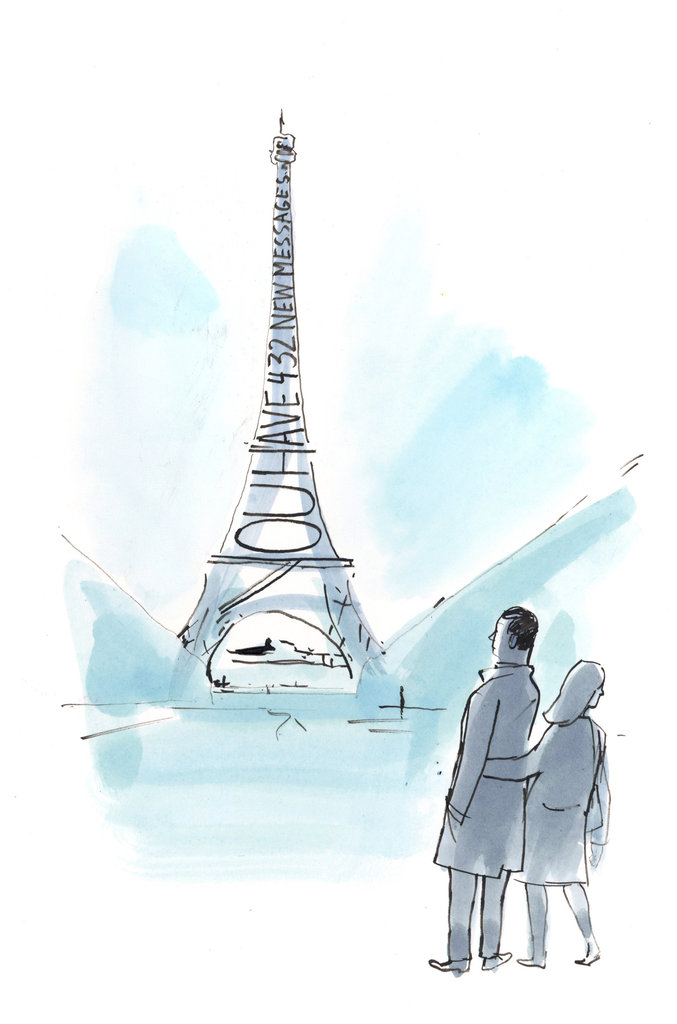 It can mean turning off your phone an hour before bedtime, or not looking at it first thing in the morning. If you are addicted not to the refresh button on your device but to intensity itself, try stepping away from that, too. Take a walk, or put your feet up on your desk and close your eyes for 10 minutes. Best yet, experts say, practice some kind of exercise or meditation designed to slow the mind.

Ms. Seppala has seen its effects. She’s been working with veterans returning from Iraq and Afghanistan, helping them disconnect from the intensity and trauma of war. They use a simple exercise: deep breathing. Even after a few breaths there was a drop in the veterans’ “startle response.” They were less hyped up.

If the vets can come down with some basic breathing, we can, too. And the sooner we start and the more regularly we practice, the better.

Leave Your Context at Home

Habits are formed and reinforced by our physical context. Wake up in the same bed, see the clock, plod to the shower, drive to the office. Repeat. But habits aren’t merely physical; they’re emotional, too. Your physical surroundings reinforce your state of mind, explained Russell Poldrack, a professor of neurobiology at the University of Texas.

“Habits of the mind aren’t easy to break in a few days,” he said. Especially if you don’t change your context.

Which, it seems perhaps too obvious to point out, is why we go on vacation. But these days we are perhaps unaware of just how much of our everyday life we bring along, too. No, not the office or the commuter train, but the phone — that cubicle in your pocket.

Phones and computers fundamentally encourage, even demand, a constant cycle of stimulation and response. Click or swipe, and something happens. And responding to a ping, researchers say, delivers a “dopamine squirt” — a little burst of adrenaline. The brain gets used to this stimulation and then craves it in its absence.

Yes, some people can hit the off button and be done with it. Others can’t, and shouldn’t necessarily have to. (That, researchers say, can provoke stress in its own right.)

But to the extent that you can, make a point to change your relationship with your device. Maybe leave it in one place and refuse to tote it around all day. One Silicon Valley big shot told me he brings his phone but disables e-mail. Whatever you decide, see your gadget for what it is — a copper wire straight into the life you’re trying to escape.

There you are, lying on a chaise by the pool, a book at the ready. But instead of sitting back and reading it, you are getting up every five minutes to see whether the adventure hut is open so you can schedule your water-Pilates instruction. Or you are at the lake house, breezes coming up off the water, and instead of enjoying them you are obsessing about a dinner party you’ve just arranged. What grain goes best with barbecued cod?! This is your brain still whirring, hunting and pecking, scanning for stimulus. 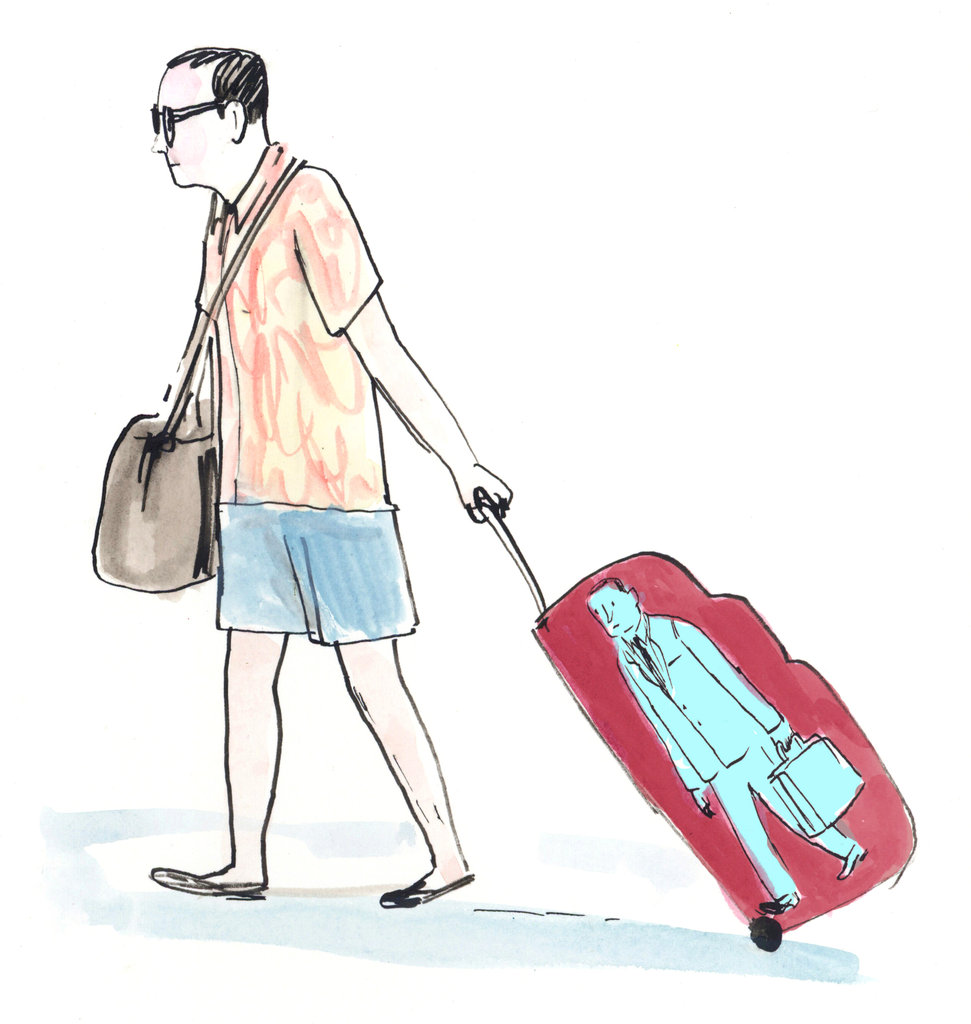 “Don’t put down the phone just to get preoccupied by something else,” said Soren Gordhamer, the organizer of Wisdom 2.0, a growing movement in the Bay Area aimed at helping people find balance in the modern world. “If you’re not careful, the same orientation you have toward your device, you’ll put toward something else.”

First, fight through the withdrawal — not just from your device but also from the constant need to be doing something. (If you find this unpleasant, and chances are you will, it doesn’t mean that your vacation is bad or that you hate your family.)

To help your brain along, researchers have a few thoughts. First, plunge into an absorbing but low-stakes activity — hiking, snorkeling, knitting a two-piece. Novel and unfamiliar tasks help tug our brains out of their ruts. Second, if you are up to a slightly higher level of difficulty, just observe your brain as it moves from thing to thing, hunts and pecks. Make a sport of watching it bounce from one thing to the next, a pinball slowly — you hope — losing momentum.

Your workplace will not implode if you’re not there. Please don’t make me prove it to you using math. And the fact that it can keep running in your absence doesn’t mean you’ll return to a pink slip.

Don’t Prepare for Your Own Death

Before I go on vacation, even for a week, I prepare as though I’m headed to the coroner. I empty the in-box, clean the piles on the desk, put away all the laundry, dust.

On the face of it I’m just getting my personal effects in order so that, presuming I survive my vacation, I also spend it worry-free, liberated to enjoy things to the fullest. But in the process, experts say, I am also significantly raising the stakes for my impending trip.

And raising expectations, some research shows, can have great costs. It builds dopamine, for one thing, which can lead to happy feelings. But if expectations aren’t met — if the pool is a bit subpar, say — dopamine levels fall. “This feeling is not pleasant,” said David Rock, director of the NeuroLeadership Institute. “It feels a lot like pain.”

Mr. Rock, who uses principles of brain science to consult with organizations about management and leadership, advises keeping those expectations in check. “Not getting what you expect,” he said, “can create a funk that lasts for days.”

Sometimes with breaks, less can feel like more. Memorial Day, the Fourth of July, Columbus Day (whenever that is) can seem more relaxing than a full week’s vacation. Why? It helps that on national holidays we are often getting a free day along with a lot of other people we work with. Less guilt. Less anxiety. But we also tend not to prepare for three days off with the same manic intensity as we do when preparing for a week off.

So before you leave, tie up whatever loose ends you can. But no double knots. Your mantra: it’s not a week’s vacation, it’s a series of two three-day weekends, plus a bonus day. 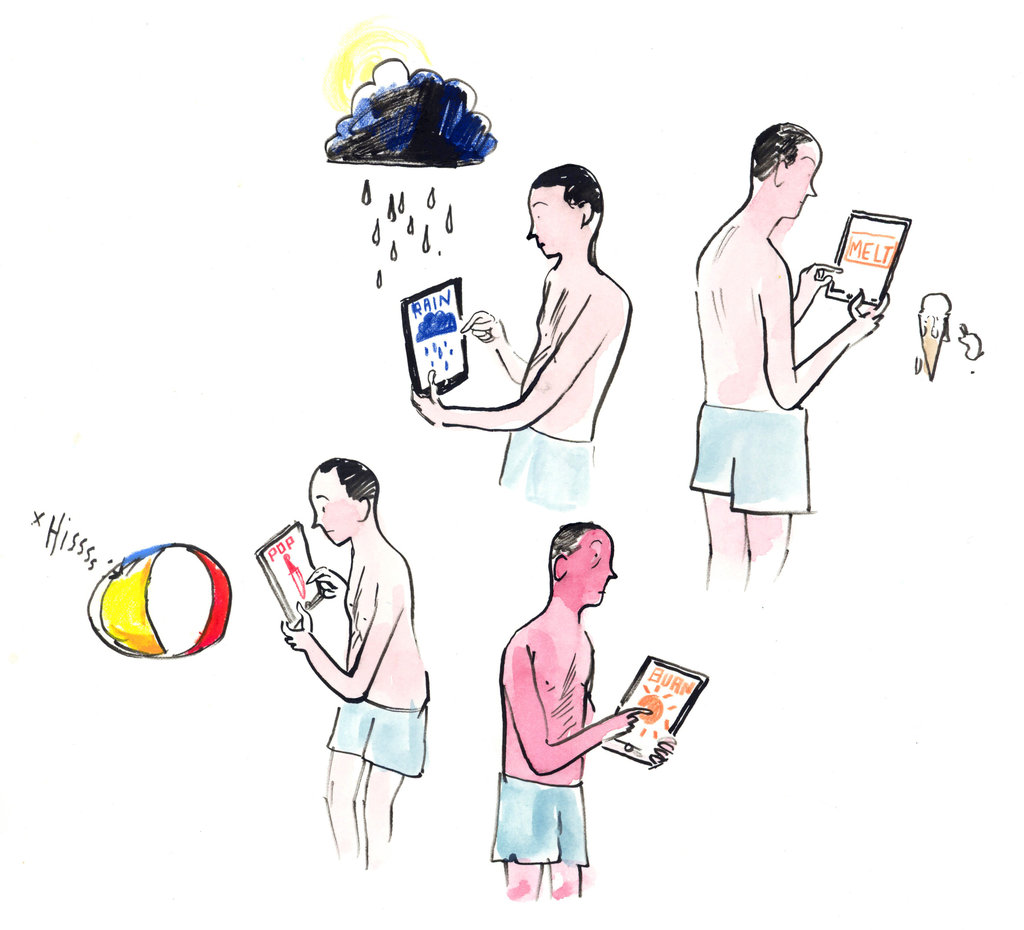 Jonathan Schooler, a psychology professor at the University of California at Santa Barbara, offered a cautionary tale. A recent family trip to Norway intended for relaxation became an exercise in frustration instead because he thought he could fit in a little work along the way. He’d take out his laptop, fiddle, not get much done or just think about the work he’d promised himself he’d do. But he didn’t do it. And he never fully relaxed either.

Of all people, he said, he should know better. Really. His research has shown that creativity incubates when people let their minds wander or do only mildly engaging mental tasks. People sense it might be true, he said, but in a wired world we often only pay lip service to the idea that we need to disconnect.

“Part of the problem is that we don’t really believe in the value of incubation and the value of mind wandering,” he said, adding with a laugh, “I’m still ruining vacations by taking work with me, trying to get stuff done.”

He thinks people do this for two reasons: we persuade ourselves that we can’t afford to do otherwise, and we actually believe we can be productive in these spurts on vacation.

In reality, he believes, working during a break doesn’t just interfere with your vacation; it can also prevent you from fully filling your creative tank before your return.

Don’t Worry About Re-Entry; Most of It’s Spam

“Who wants to come back from vacation to 1,000 e-mails?” asked Sylvia Allegretto, an economist at the Institute for Research on Labor and Employment at the University of California at Berkeley. No one wants to feel so buried that they’d wish they’d stayed home.

Ms. Allegretto has not always loved her solution to this problem: keeping up with e-mail on vacation, not wanting to fall behind. She feels as though she’s never fully relaxed.

Something good happened, though, on a recent trip home to visit her family in rural Pennsylvania. She found herself in a nail salon, getting a pedicure in the middle of the day, surrounded by old friends, drinking a beer.“It’s how life used to be,” she said.

After that, she got lost in her hometown, a place both new and familiar. She stopped checking e-mail, partly because the town has poor cellphone reception. She really relaxed. She returned to hundreds of e-mails, but not only did she survive, so did her vacation.

This site uses Akismet to reduce spam. Learn how your comment data is processed.