“You ask yourself what you want to keep, and the answer is ‘everything,’ ” said Dr. Harrison-Ross, who turns 80 next month. “It’s an emotional roller coaster that takes a toll on you. It’s very tiring.

“I thought I could get down to the bare essence of things myself,” she said. “But that proved to be very difficult, much more than I had expected.”

Moving is stressful at any age, but for those who have lived in one place for many years, getting rid of things that have accumulated over decades is a large barrier to overcome.

As people get older, said David J. Ekerdt, a professor of sociology and gerontology at the University of Kansas, cognitive and physical issues hamper divestment. “It’s also a very emotional task. It’s hard to quantify the attachment one has to certain possessions,” he said, adding that the probability of people divesting themselves of their belongings decreases each decade after age 50. 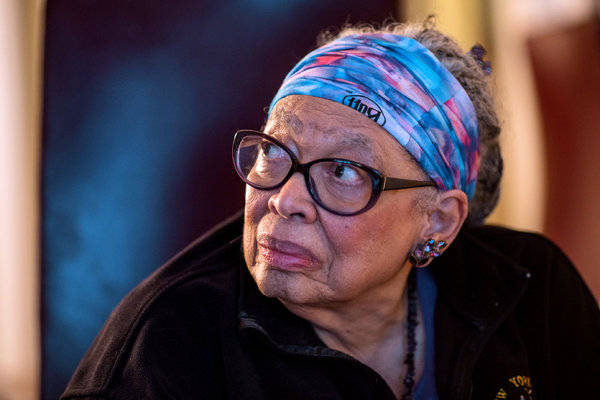 “You ask yourself what you want to keep, and the answer is ‘everything,’” said Dr. Harrison-Ross, who turns 80 next month.
EMON HASSAN FOR THE NEW YORK TIMES

Senior move managers specialize in the issues that comes with downsizing, including donating and selling items and hiring movers. In New York, these managers maneuver through the often stringent moving and trash-disposal rules adopted by co-ops and condominium buildings. They also deal with out-of-town family members who may want items sent to them. They pack and unpack; they call the cable company. Most also help with decluttering and organizing the homes of seniors who wish to stay put.

The specialty is new, so no one can estimate just how many senior move managers there might be in the United States. But Mary Kay Buysse, the executive director of the National Association of Senior Move Managers, said: “Our membership has grown from 22 members in 2002 to nearly 1,000 members today. Though most of our current data is anecdotal, we know members managed over 100,000 senior moves last year.” She added that total revenue among the members was about $150 million last year.

Dr. Harrison-Ross, a commissioner of the New York State Commission of Correction and chairwoman of the commission’s medical review board, said she first thought about moving from her four-bedroom co-op on the Upper West Side about five years ago, but didn’t start looking for a smaller place until health issues took a toll about two years ago.

“There were rooms I didn’t go into for days,” said Dr. Harrison-Ross, who has lived in the apartment for 48 years.

She found a spot in an apartment building for seniors on the Upper West Side, but knew she was in trouble when her first impulse was to “stick everything I had into storage and forget about it unless I needed something.” 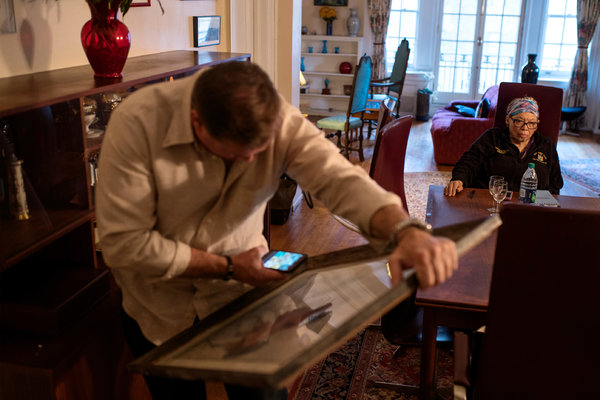 Mr. Berman evaluates an artwork during his visit to Dr. Harrison-Ross.
EMON HASSAN FOR THE NEW YORK TIMES

She asked a friend to help her get organized. But the two puzzled over how to get rid of large items or whom to call to sell furniture and artwork.

Then Dr. Harrison-Ross’s real estate agent referred her to Katie Hustead, who with her husband, Joseph Weston, runs Paper Moon Moves, a Brooklyn company specializing in seniors. She talked to Ms. Hustead on the phone and met with her in person before she signed on.

“It’s very important to hire someone that you can trust, because the decisions you’re making are very emotional,” Dr. Harrison-Ross said. “Once I knew I could trust Katie, things started to move forward, because any suggestion she would make, I knew she had thought about what was important to me.”

Most senior move managers in New York charge about $100 per hour, higher than the national average. In a 2014 survey conducted by the National Association of Senior Move Managers, 50 percent of the respondents said they charged between $41 and $60 per hour.

Ms. Hustead said she likes potential clients to get in touch with her about six weeks before a planned move date. She will then sort and inventory all the items in the client’s home and determine what should be donated to charity, given to a friend or relative, sold or trashed. To decide which furniture can be moved into a client’s new home, Ms. Hustead uses Mark On Call, an interior design app, on her iPad, to help clients visualize what furniture fits in what room. 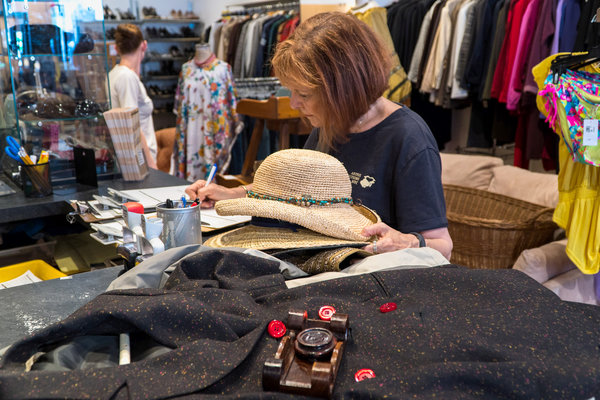 Linda Frankel, of Artful Transitions NYC, in a Housing Works store in Manhattan, filling out forms to donate a client’s belongings.
EMON HASSAN FOR THE NEW YORK TIMES

“This is helpful because it shows the client that you can’t bring everything, because it simply won’t fit,” Ms. Hustead said.

She also takes dozens of photos of the insides of cabinets, closets and dressers, so if she is asked to unpack after the move, she can recreate the placement of things for her clients.

Move managers also have a long list of contacts for specific tasks, Ms. Buysse said. For example, a good move manager will know not to call a top-tier auctioneer for something worth a few thousand dollars, and know which estate liquidators or junk haulers work well with seniors.

Move managers can also step in when adult children don’t live near their parents or don’t have time to help sort through belongings. Judith Kahn, who owns Judith Moves You, a Manhattan company that specializes in senior moves, said most seniors can handle an organizational task for only about three hours a day, which can frustrate adult children who have flown in for the weekend and want to get things done quickly.

“Kids often have a different idea of how their parents should move, so it’s better if a move manager can be that understanding, neutral person,” Ms. Kahn said. 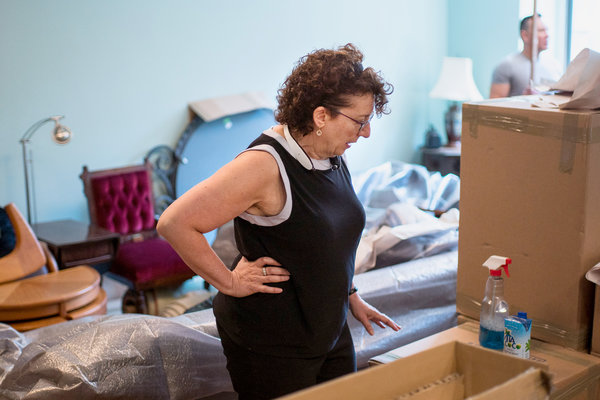 Judith Kahn, who owns Judith Moves You, oversees a client’s move into a new apartment on the Upper West Side.
Linda E. Frankel, a move manager and owner of Artful Transitions NYC in Manhattan, said many urban seniors don’t cull their belongings simply because they don’t have a car to easily transport things. Ms. Frankel said she uses nonprofit organizations like the City Opera Thrift Shop or Housing Works because they have trucks that can be dispatched for large pickups.

Items with monetary value are either handed over to auction houses, which take a commission after the items are sold, or to estate liquidators and dealers, who give the seller money upfront.

Documents that can authenticate artwork are key, said Robert Berman, an owner of Capo Auction in Long Island City, Queens, who visited Dr. Harrison-Ross at home one afternoon. After looking at her furniture and artwork, which included paintings by Herbert Gentry, an African-American expressionist painter, Mr. Berman took the Whitney baby grand piano, which had been given to her by her parents. She kept the paintings.

“This is a nice size, perfect for a Manhattan apartment,” Mr. Berman said of the piano. He estimated it could fetch between $800 and $1,200, from which he would receive a 23 percent commission.

Midcentury modern furniture is perhaps most coveted by dealers, while most ornate dining room sets — especially those that come with china cabinets, buffets and hutches — will not sell, according to Ms. Frankel. “It’s sad, because dining room sets were the biggest purchases people of this generation made, and it holds huge sentimental value,” she said. “But even their kids don’t want it.”

A member of the staff of Judith Moves You organizes the bookshelves in the bedroom of the client’s new apartment.

She often shows her clients how low similar furniture has been priced on internet commerce sites and how long it takes to sell such items, which quells most ambitions to seek top dollar.

Instead, she tells clients that the most likely scenario is that “someone will buy it from a dealer or a thrift store and it will have a new life,” Ms. Frankel said.

That said, people hire move managers not just for their organizational skills but for their discerning eye. Ms. Frankel once came across an Arabic manuscript in a pile of books; her client had no idea where it had come from. Ms. Frankel had a hunch it was a rare find and she was right; the book was a late-17th-century Ottoman Quran and sold, she said, through Sotheby’s London in 2014 for about $50,000.

Not surprisingly, specialists in senior moves say their business is growing. According to the New York City Department for the Aging, about 1 million individuals in the five boroughs were 65 years and older in 2010. By 2030, the number is expected to grow to about 1.35 million. The Department of City Planning estimates there will be a total of 8.8 million New Yorkers by 2030, up by about 7 percent from the estimated 8.2 million figure for 2010. 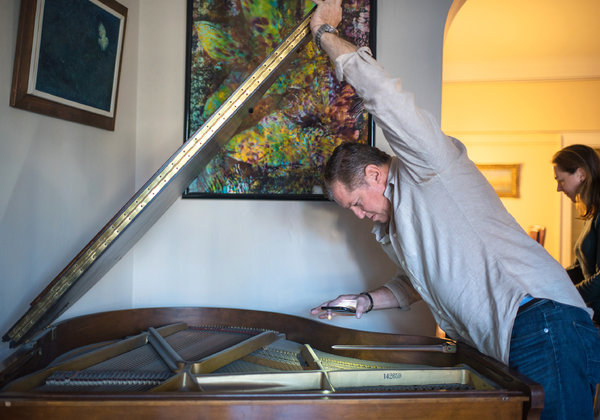 Mr. Berman inspects a baby grand piano that is not moving with Dr. Harrison-Ross to her new digs.

Some people hire move managers to help make it easier to stay in their apartments.

When Donald Pandina, 80, and Sal Cigna, 78, a married couple who have lived in a Brooklyn Heights co-op since 1978, called in the cavalry, they had accumulated so much they were using one of their bedrooms “as a garage,” Mr. Pandina said.

“There are things in there that we thought would be great to use in our vacation home, which we never purchased,” he said.

Mr. Cigna said their spacious apartment seemed more and more crowded. A referral from a friend led to Mr. Weston of Paper Moon, who helped them cull their belongings. “By doing all of this now, I think we’ll be able to make quick decisions if and when we decide to move,” Mr. Pandina said.

Many, however, don’t call move managers until the situation is dire. Fran O’Brien, 52, found herself in such a jam when her mother’s health rapidly deteriorated. By early this year, it was clear that her mother, Astrid O’Brien, needed round-the-clock care, and her parents would have to leave their home of 54 years in Riverdale, the Bronx.

“It is truly a frightful prospect to suddenly have to determine what you want to keep,” said Robert O’Brien, Fran O’Brien’s father. “I became anxious because I knew I couldn’t do this alone.”

In early March, Astrid O’Brien moved into an assisted living facility in Paramus, N.J., and Ms. Kahn of Judith Moves You was hired to sort through the couple’s things. The O’Briens, both philosophy professors at Fordham College at Lincoln Center for more than 50 years, had over a thousand books, mostly on philosophy, Ms. Kahn said.

Ms. Kahn and Mr. O’Brien, 85, pared down the collection to about 300 books. Mr. O’Brien said he couldn’t believe how quickly Ms. Kahn worked. In a few weeks she managed to get him moved in with his wife, who died four days later at age 82.

“Judith’s expertise and know-how was simply priceless,” he said.

“I didn’t want to spend the little time I had left with my mom packing boxes in the Bronx,” Ms. O’Brien said. “It was such a relief when I found Judith.”

This site uses Akismet to reduce spam. Learn how your comment data is processed.